The layout of this website may not be displayed correctly in your browser.

With an up-to-date browser, you will probably have a better user experience on the web.

My name is Bastian Nolte. I have about 24 years of professional experience in the IT field, both as a consultant, trainer/facilitator, IT architect and software developer, as well as in project management roles with and without personnel responsibilities.

I see myself more as a generalist and supporter than a specialist. My broad knowledge will allow me to help you find and implement efficient solutions even for complex problems.

I am looking forward to supporting you in initiating and successfully establishing changes and innovation processes.

Currently, I support my clients primarily in consulting, software (development) and training. I am happy to help your Organisation in aligning towards Azure Cloud and DevOps teams.

This Curriculum Vitae is also available as PDF and PDF in short version.

In the last ten years, I have been mainly involved in projects in the insurance, automotive, industry, administration and education sectors. My clients include companies like Capgemini Schweiz AG, the Swiss Accident Insurance Fund (Suva), CSS Health Insurance, Volkswagen, Siemens, msg Systems, T-Systems and various institutions, like the Berlin State Library, the East Asian Institute, and various state authorities and councils.

We use methods, frameworks and mechanisms of agile development, such as Scrum, LeSS, Continuous Integration, test-driven development, mob- and pair-programming, combined with process supporting software like Atlassian JIRA, Confluence and Team City.

I have a wide range of expertise in various programming languages. My preferred languages are TypeScript and F#.

Furthermore, I have many years of experience in project planning and coordination and the administration of various server and cloud services, such as Microsoft Azure.

I am proficient in the use of the most common databases. Knowledge in Spring (Boot), Java EE and various frameworks and libraries, such as MicroProfile, vue.js and Angular, completes my profile.

Telecommunications
IT Security
⇪ back to top 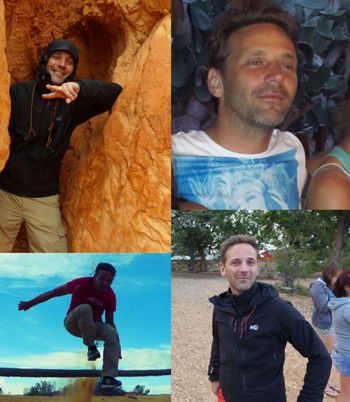 Regular further education is the foundation of in-depth expertise. Therefore, I am constantly training myself, primarily using the possibilities of the World Wide Web. You can find a list of the most recent further education courses in the following table.

The following chapter presents my soft skills, visualised as a graph and in table form.

The following chapters will give you an overview of my IT skills, visualised in graphs and tables. Nodes with a red background indicate that I currently prefer to work with that technology.

Overview of the pattern language.

The following chapters present my work profile to date using project extracts as examples. The presentation is in tabular form and includes my role in the respective projects, including a description of the projects, the technologies and the tools used.

Click on a topic to filter the projects by that criteria.

A platform for brokering tickets of Swiss attractions

This project was about planning and implementing a platform for the central distribution of tickets of Swiss attraction providers via a common it-platform. In addition to offering tickets, we implemented features such as weather information, opening hours, ride times, and billing.

In this startup project, I had a multifunctional role. Initially, I was mainly involved in consulting and training to then subsequently support the setup of an Azure cloud environment and the development of the overall solution (hands-on).

In the beginning, I provided training on process models from project organization, such as SCRUM and Kanban. Then, in joint workshops, we evaluated which software best met our requirements. We then set up this software together and integrated its use into our daily processes.

After introducing essential tools such as Atlassian Jira, Confluence, Mural and Zoom, we moved towards more development-related topics.

In the second phase, we continued to build understanding and technical foundations for agile software development in workshops. Topics included continuous integration and deployment, the test pyramid, and code quality topics such as SOLID, TDD, mob and pair programming, and KISS.

In the third phase, we jointly designed and implemented a minimum marketable product (MMP). We built the development and integration environments, configured and provisioned the Azure cloud resources and performed the software development. In the grid below, you will find information on the technologies used.

Planning and implementation of this Curriculum Vitae / Résumé website.

CSS Insurance is not just a health insurance company but an insurance company for every situation in life. When it comes to health, around 1.7 million people place their trust in CSS. Its wide range of products includes health, accident and property insurance.

Consultant and trainer for innovation, as well as software excellence and craftsmanship

From 2018 to 2020, I supported CSS Insurance in various areas. I promoted the further development of employees in my stream towards even more excellence and know-how by planning and conducting training and workshops on excellence and innovation topics.

I also supported and actively participated in introducing mob and pair programmings, mainly on software craftsmanship and software excellence.

Furthermore, I supported the client in the development areas of front-end and back-end development and DevOps to initiate the transition into the world of cloud computing.

I helped my SCRUM teams analyse concrete problems, find solutions and implement them while adhering to best practices, and provided advice to the teams and lead architects of my stream.

From September 2015 to December 2017, I was involved in various projects at Swiss Accident Insurance Fund (Suva).

The Swiss Accident Insurance Suva is an essential part of the Swiss social security system. As an independent company under public law, Suva insures people at work and in their leisure time. Its prevention programmes in occupational and leisure safety prevent accidents and occupational illnesses, promote a safety culture in companies, raise awareness of hazards, and motivate people to take personal responsibility.

In the following chapters, I will break down the projects I was able to accompany at Suva.

In the RiskPricing programme, the processes for premium assessment and the systems for setting premium rates were redeveloped, taking into account the industry, risk community, bonus-malus and experience rating, and new large claims and reinsurance solutions were also implemented.

A solution was created for analysing the current risk situation and the financial situation, taking into account information from the risk information system and the adcubum SYRIUS insurance software, based on which the premium situation can be assessed and the reduction of compensation reserves calculated.

Support in the run-up to the production roll-out of an IT system for a leading global provider of solutions for access control and locking systems in the security industry, which gradually replaced and consolidated the core systems of the country subsidiaries.

From October 2011 to August 2014, I worked on various projects for Volkswagen AG (including Audi). I will discuss the projects in detail in the following chapters.

Architecture and implementation of a library as well as the client platform (fat client) for the start-up planning of the production of new vehicle models for a large German car manufacturer. Development of the client architecture, as well as lead development client, and co-development middleware and backend.

Further development, bug fixing, refactoring and architectural realignment of a platform for planning and evaluation, as well as calculation and controlling of innovation projects in the automotive sector (primarily CO₂ and weight reduction) of a large German car manufacturer

InSecMa Solutions is a software company that deals with the creation of individual software and the planning, installation, configuration and operation of networks and Unix system infrastructures.

Its customers include public authorities, institutions and clients from industry. The company also develops and sells a Linux distribution for schools based on Debian GNU/Linux.

Development of a licence manager as a web-based Java EE application with an integrated SOAP interface, which enables the administration of software and customers with regard to the management of software licences. It is a classic administration application that relies primarily on input masks. The product is currently used to administer about 150 servers at 120 locations with about 60,000 connected client workstations.

System solution for the schools of the city of Chemnitz to support the interdisciplinary use of new media (Sys-C).

As part of the Sys-C project, we developed a solution to support the interdisciplinary use of new media at schools in the city of Chemnitz. The Federal Ministry of Education and Research and the European Social Fund funded the project. The project management agency is the German Aerospace Center (DLR), more precisely the Project Management Agency New Media in Education (PT-DLR, Project Management Agency - part of the German Aerospace Center). We developed a uniform system software for school use in lessons for approximately 85 schools.

As part of a conversion of the web services of the Berlin State Library to a high availability solution, we planned, installed, configured and maintained various services.

We developed a backup strategy for the Prussian Cultural Heritage Foundation, ensuring quick recovery of the Unix and Linux server systems and various data storage devices and databases after system failures. Servers at two locations, as well as their configurations and system states, are backed up. Targeted recovery of data stocks is supported, as well as disaster recovery.

Developed an electronic ordering system for the State Office for Data Processing and IT Service Tasks (LDS), now Brandenburg IT Service Provider (ZIT-BB).

The new procurement procedure makes an essential contribution to the modernisation of the Brandenburg administration. All authorities have access to this flexible and valuable instrument to meet their IT needs.

InSecMa implemented the planning and creation of a web-based application through which the various departments of the administrations can place orders via the intranet.

Printium AG was a company specialised in trading and processing print orders via the internet. In my role as head of the frontend development department, I was primarily responsible for the coordination of the developers and architectural issues.

For project enquiries, please contact me by email or via one of my profiles (e.g. on Xing).